​ENGR 490: Multidisciplinary Senior Design (2016)
Check out the Video!
Team: Sahil Madeka, Christopher Shih, Clark Teeple, Tong Xuan, Sean Zhang
Faculty Sponsors: Lauro Ojeda, Prof. Brian Gilchrist
Special Thanks: Kellogg Eye Center support group for those with low vision
Low vision in various forms affects a large percentage of the population at some point in their lives. In fact, in 2013, on study estimates that 7.3 million people over the age of 16 have a visual disability in the U.S. Disorders such as macular degeneration,  cataracts, and glaucoma affect different aspects of visual perception, and can cause those affected to have difficulty navigating their surroundings, especially in unfamiliar places. Furthermore, the current industry standard solution for non-visual navigation, the white cane, is effective at providing users with feedback about the world via tactile and auditory cues, but often only provides a limited range (length of the cane, and only a single point of information at a time.

Different eye disorders affect many aspects of visual perception. (left-to-right) Simulated effects of age-related macular degeneration, cataract, diabetic retinopathy, and glaucoma are shown.
The environment provides a wealth of information which can be handled well by vision, but much of that information is lost when using a traditional cane. Our system attempts to increase the bandwidth of information given to those with low vision to help then navigate the world more confidently.

My main contribution to the team was my role as the mechanical design lead for the haptic wristband interface. With input from Tong Xuan, I designed, built, and integrated, the a comfortable haptic wristband with integrated vibrational feedback. I also lead the development of the gestures we used to convey navigational information.
​The haptic wristband uses an UnderArmour wristband with small vibrating motors to produce haptic feedback around the entire wrist. 10 motors encircle the wrist, with an additional four motors placed on the top and bottom of the wrist split evenly. An Arduino Mega was used to coordinate vibrations of each motor to enable individually addressable vibration at any point around the wrist. 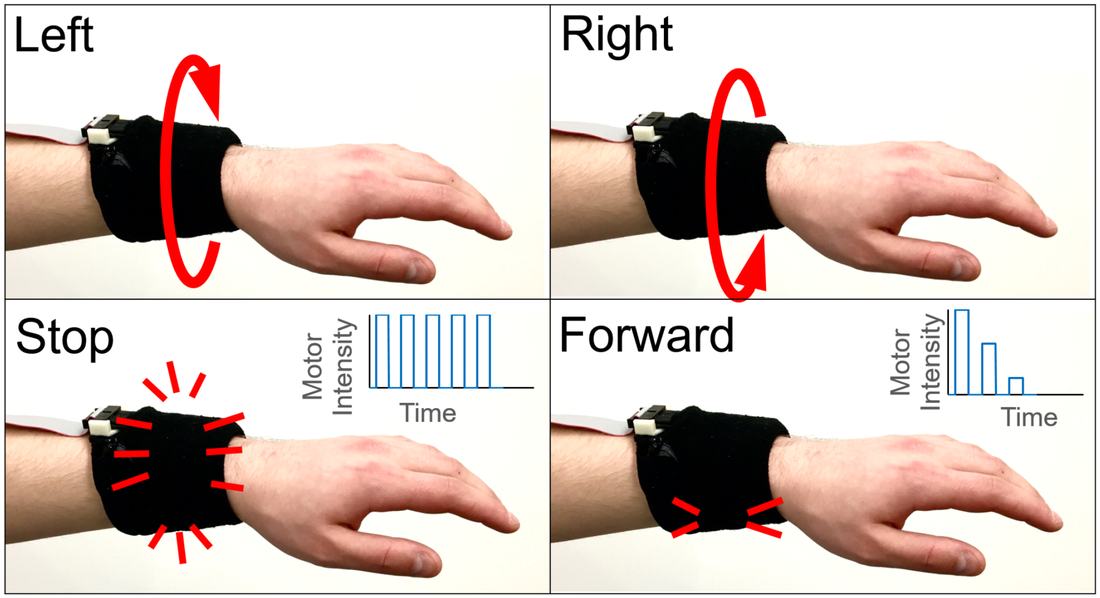 Forward:
The forward gesture is produced by creating vibrations with steadily decreasing intensity on the bottom of the wrist. This tells the user that the system is active.

Stop:
To tell the user to stop, we vibrate all motors five times to ensure a noticeable sensation and prevent users from hitting obstacles. 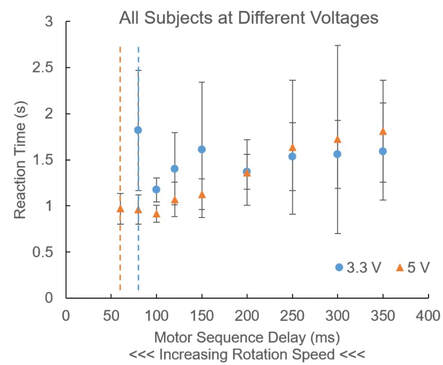 We characterized how the speed of rotation and intensity of vibration of the wristband affect reaction time of the user. The results of these tests are shown above, with reaction time as a function of wristband rotation speed and vibration intensity.

​At 3.3 V (low intensity), no discernable trend can be determined. However, at 5 V (high intensity), the distribution of reaction times becomes narrower, and the mean decreases as rotation speed increases. Optimal conditions for user reaction time appear to be at 5V, and around 80-150 ms delay between sequential motors, with 80-60 ms. being the fastest possible speed before the user can no-longer determine the desired direction. Error bars show the standard deviation of n=6 trials.
User studies with real patients:

We were lucky enough to have the opportunity to test our prototype with several patients at the Kellogg Eye Center.
​
​See the above video at time = 2:04 for an example test!